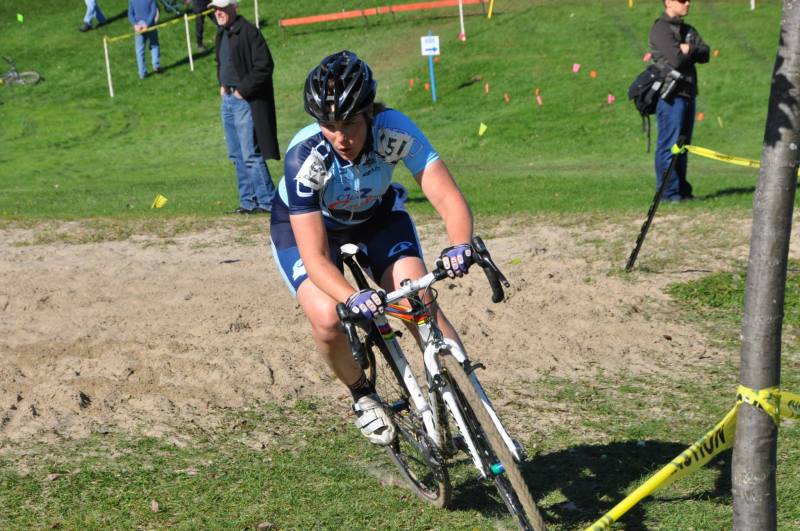 I think I found my favourite Canadian cyclo-cross course… And it is a mere 20 minute drive or 45 minute bike ride from my home. I sure did enjoy racing in North Gower on Thanksgiving Sunday. At first glance I felt like it was  a long course… but nope rather it was a course jam-packed with lots of action and challenges.

Only thing this race course was missing was a fly-over! (No, I’m not trying to open up the fly-over controversy… I happen to really like fly-overs, but I know some people really don’t like them.)

Anyway, back to North Gower. Really it was just a super day for a cyclo-cross race. Initially I thought it would be a long-sleeved skin suit day but it turned out to be quite warm – it ended up being a short-sleeved skin suit no-base layer kind of day. Perfect! I arrived before the first race so I could get out and pre-ride with the women who come out to my weekly cyclo-cross clinics. This worked out fairly well, though I didn’t get a chance to ride with everyone – but I think overall it worked out well.

The biggest question mark for most was the sand pit. In my opinion, riding sand has a lot to do with confidence. Believe you can get through the sand and you can do it. Granted I’ve had the best sand riding experience and practice possible – a week practicing in Koksijde on the famous World Cup course, top-notch instruction from the Belgian Cyclo-Cross Team coach, racing in a lot of sand while living in Belgium, and living 15 minutes of pedaling from the Averbode cyclo-cross training course and super sand pit. I’ve also benefited from lots of practice with Marc, Conor, and Karl – each one giving me a nugget of information that helped me find some sand confidence.

Here’s a video of the women’s World Cyclo-Cross Championship race in Koksijde in 2012:

(Okay, back to North Gower…)

Really, the race and the day were just super great. I had my typical slow start and then found that gear I’d been missing all season. Slowly but surely I found my legs and I was deep in the cyclo-cross pain cave. My goal was to simply keep digging deeper and deeper to see how hard I could push myself and to not let the women chasing me catch up. I tried to stick to my race management plan and use areas of the course for recovery – for me this was the double barriers, the turns around the fir trees and the descent. Otherwise I was trying to ride hard and to sprint out of every corner, slow-down, barrier and obstacle. I found that in the last lap I was making small mistakes – a sign that I was riding hard and feeling some fatigue. All in all, I’m happy with the physical effort I was able to give and with my technical riding skills.

It seemed like everyone I spoke to after the race had a big grin on their face and was happy with the day. We all have sections and moments in the race that we’d like to “do over” but that’s what the next race is for. I know that next race I’ll try to have a more aggressive start so I don’t have to play so much catch-up and I’ll try to dig a notch deeper.

Thanks to everyone for the cheering and encouragement during the race. Many thanks to the photographers capturing the action for us racers. And a tremendous thanks to the volunteers who were out in the cold doing course set-up (and many of whom who stayed for tear-down as well).